Android 12 Developer Preview 1 (DP1), the 12th major version and the latest Android update of the Android operating system has just been released by Google. We got our hands on the developer preview and can reveal the brand new features introduced with this next Android update, Android 12, also code-named “Snow Cone”.

Google release these developer previews to test out features before the official Android software update of their stable release. The Android 12 release date will likely be this August or September. It gives us a first look at Android 12 into what everyone can expect on their Android devices soon.

There has not been a major redesign of the Android UI since the change from Holo to Material Design in 2014 until now. The new Android OS will introduce an overhauled UI with a lot of visual upgrades and new transitional animations.

You can also enable a feature flag that activates Silky Home. Silky Home change the entire interface to be much more one-hand friendly, with larger headers and relocating the buttons/toggles further down the screen which makes navigation on larger screen devices easier.

Silky Home is currently only available in the Settings app, but it’s likely to be adopted to other sections in the OS in later OS releases and likely end up included in third-party apps as well.

Another big design change is that widgets are getting a redesign as well. Google has probably been eyeing the success of Apple’s Widgets overhaul last year, and it’s likely they have been taking notes and that’s why they are redesigned Widgets to be more user friendly. 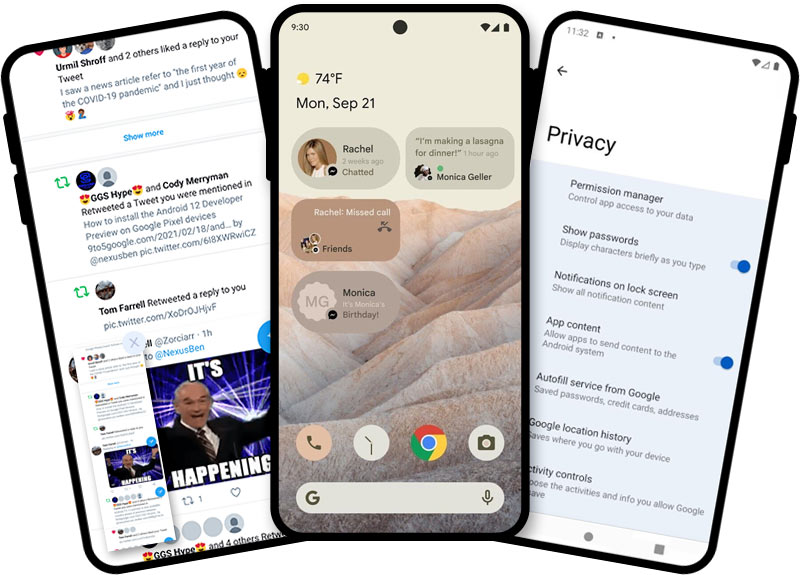 Scrolling Screenshots is another somewhat new feature. It was actually confirmed to be introduced by Google as a native feature over 2 years ago after Android 10 was just released. The feature encountered various challenges in development and was never introduced in Android 11.

In Android 12 DP1 Scrolling Screenshots are not enabled by default. Once enabled, a scroll button is overlaying the UI and it makes it possible to take screenshots of an entire scrollable page, not just what you are seeing on the screen.

The Android 12 feature is still buggy and does not not work in Chrome for example. It works great in Settings and almost a hundred percent in Twitter, except for showing the compose icon repeatedly.

The Scrolling Screenshots feature will either be stable by the official Android 12 release date and work across all apps or yet again be disabled for a future Android OS release.

If you receive a lot of notifications or just like to hide unimportant notifications to look at later, you’ll be able to with Android 12. There’s a new snooze button in the Notifications Panel where you can adjust the snooze duration between 15 minutes to 2 hours until the notification will pop up again. 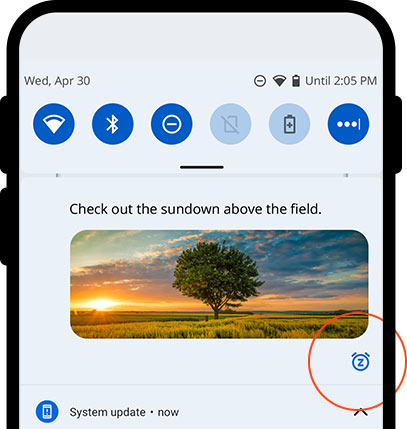 Picture-in-Picture allows you to watch videos in a floating window while you multitask for example by answering a message.

Now a new pinch-to-resize functionality has been added. It makes it possible to resize the floating window to your liking.

The second new feature added is called Stash. It makes it possible to drag your PiP window to the edge of your screen, like on Apple’s iOS.

As expected the new PiP mode is still buggy in the Android 12 Developer Preview, but it’s likely to be refined over the next 4-5 months and ready for release in the official Android 12 stable release. 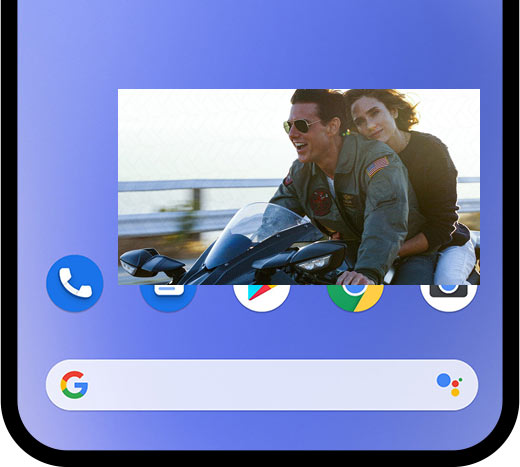 Apple released Wi-Fi password sharing in iOS11 back in September 2017. Google is finally introducing the same functionality in Android 12. You could argue why it’s been taking Google so long to embed such a useful feature, but at least it’s finally here.

With the Android 12 update a neat feature was introduced. It’s not glamorous, but just one of those helpful features that will make everyday life with your Android phone a little easier.

The new feature allow apps to prioritize active calls by showing a prominent chip in the status bar. The chip will show the duration of the call and you just have to tap it to return to your call. Easy Peasy.

You will also be able to enjoy image support for notifications, meaning for the first time small images can be added to the notifications area.

As with the Wi-Fi password sharing, Google really is eyeing some of the useful features offered on iOS. Privacy Indicators already been on iPhones and iPods for a long time is now also part of Android 12, though it’s disabled by default in the Developer Preview.

Privacy Indicators are extremely useful to protect consumers’ privacy. In their essence they are a text box that pops up on your screen if an app wants to use your camera or microphone. You can then choose to Cancel or Turn On access.

We can hope this feature expands to status indicators, also known from iOS. Status indicators show up at the top of your screen and alerts you when apps are using either your microphone or camera.

Hopefully both the Privacy Indicators will be enabled and available by the official release once tested thoroughly.

Less flashy but just as important is the optimization of image formats (image decoding). Smaller images both save your monthly data plan usage and also speeds up rendering of websites.

These are major features introduced in the brand-new Android 12 OS and they are a welcome addition to an already powerful OS. From our experience, the Android 12 stability seems as expected in an Android 12 beta version. The few bugs will surely be ironed out by the official release of the latest Android update.

We will be experimenting and getting more familiar with the Android 12 OS, so we can continue to develop apps that are both stable, polished and ground-breaking, but getting an early start also makes us able to take advantage of all the new features as leading app developers.

iOS 15 and iPadOS 15 are jam-packed with features and they are both being released to your iPhone and iPad this fall. This time Apple is not focusing on the big visual overhaul of iOS 14, but instead making the focal point about introducing really cool new features that'll make your device even more versatile. We're taking a closer look at all the greatness you'll be able to use, including a heavily upgraded FaceTime experience, new Apple Maps with 3D view in cities, sleeker notifications design, Live Text enabling you to copy/paste text from images and - of course we dare say - better privacy with offline Siri integration on select device models.