BLOG: What is an App Stack?

A technological-based app stack is used for mobile app development where you create your own app stack based on if you are developing an app for Android, iOS or cross-platform. The type of app developed also matters (game, educational, utility etc.) when choosing the right app stack.

A software-based app stack is a group of software programs working together to solve a common goal or task. 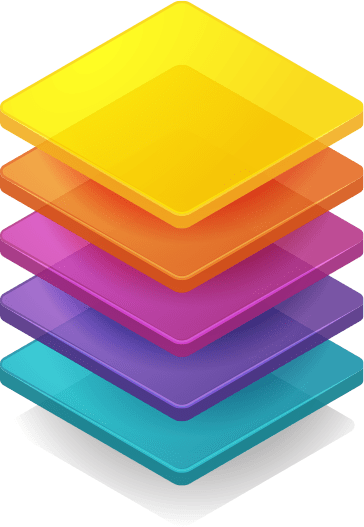 When we develop an app, we make it a priority to pick the best app stack from the beginning. It directly influences the success of the app as it affects parameters like cost of development, maintenance and scalability.

Important when choosing the app stack is also talking with our clients about whether they want native app development for Android only, iOS only, both or a cross-platform solution. The right app stack depends on the type of app they want and what market they are targeting. Each app stack has their advantages and we discuss this with our clients so they can make an informed decision based on our recommendations.

If you want to develop a native app for Android you have options when it comes to choosing the best app stack. First the toolkit/IDE, then the programming language and finally the software development kit (SDK).

Android Studio is the default development kit for native app development. It provides a perfect toolbox where you can code the app, drag and drop UI/UX elements, debug errors, deploy your app and much more.

Android Studio is free to use and will give you the fastest access to new features/functionality released by Google, that you can include in your app as soon as they are available (with cross-platform apps you will have to wait until third-party providers embed them).

You will also enjoy a performance boost by developing natively due to code optimization.

Unreal Engine and Unity are both tool kits targeted game development. They are highly optimized game engines used by many game developers on mobile. Unity is less flashy (read: the quality of visuals is lower) but doesn’t require the same high-end phone hardware to run, so it’s a preferred choice for less complex game development.

There are many programming languages available for Android development.

Kotlin is another official Android Studio programming language. It is not as complex as Java to learn and it is Google’s preferred language. Kotlin is light-weight and since it’s easier to master than Java it is also prone to more stable code.

C# is an in-between of Java and Kotlin in terms of complexity while programming. As with C++ it can be used for any app type, but since it is supported by Unity, it makes it another great choice for game development. In this case the app stack would replace Android Studio with Unity.

Any mobile development app stack must include an SDK. The SDK include an emulator for the Android phone(s) it needs to run on.

The emulator enables the app to be tested for usability during development and troubleshooting of bugs. 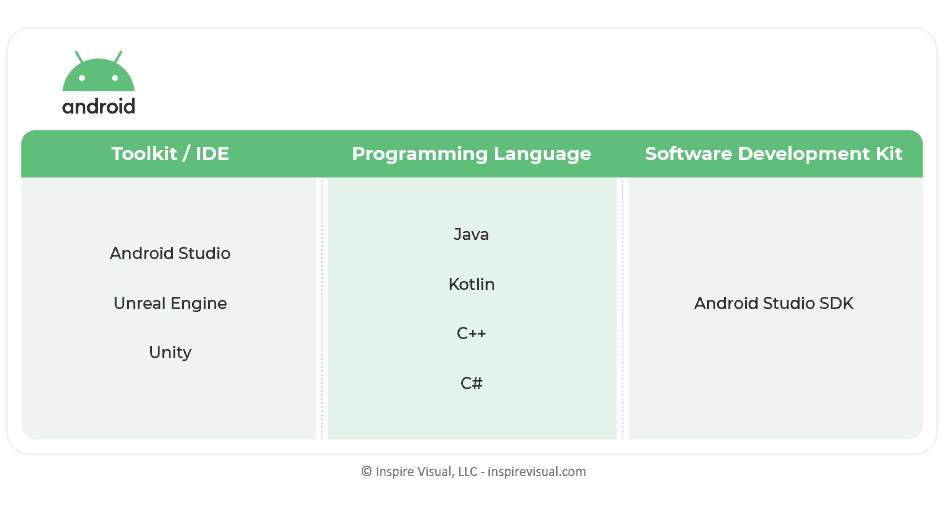 When developing an app for iOS you also have some choices when it comes to selecting the best app stack for native app development. Even though Apple is known to lock their ecosystem tighter than Google, the app stack consists of the same main categories; a toolkit/IDE, the programming language and the software development kit.

Xcode is the software development kit for all of Apple’s products, including MacOS, iOS, iPadOS, watchOS and tvOS. All tools for managing the development phase is included, including creating your app, bug testing, optimization and app store submission. Xcode also provides a graphical editor to make UI/UX creation easier.

Swift was invented by Apple to replace Objective C. While Objective C can still be used, Swift is more intuitive and concise and is easier to optimize for faster apps and much less prone to errors as it has built in safe-guards to prevent this. Memory is managed (it is not for Objective C), variables are initialized before use and arrays are checked for overflow memory just to name a few advantages.

There are other programming languages available for iOS development. They are created by other companies and not as popular as Objective C and Swift.

The iOS SDK offer a great emulator allowing developers to simulate and test their app on different iPhone versions. The iOS SDK is continuously updated to accommodate the new mac hardware being released, including iPhones. The iOS SDK supports multi-touch, accelerometer, camera, audio mixing, animation, networking and much more. 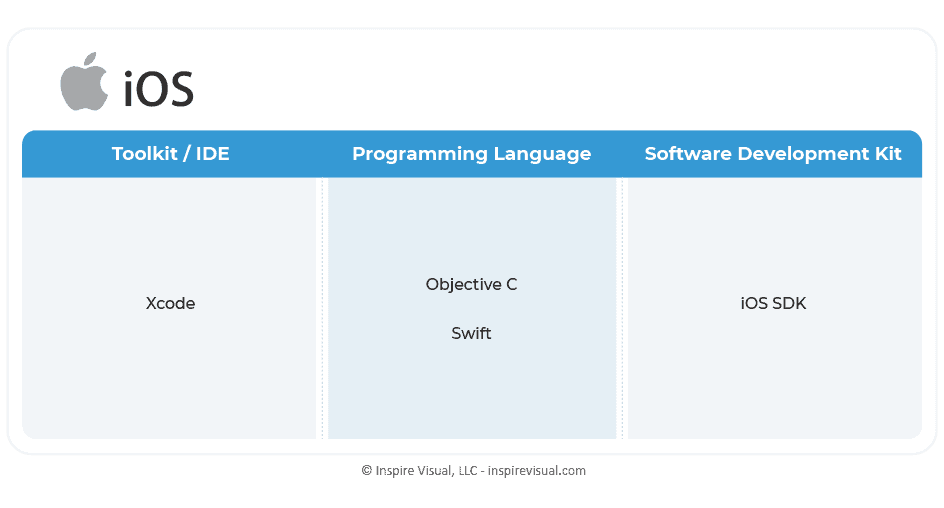 App stack for cross-platform development on Android and iOS devices

Previously when building an app there wasn’t any great tools for cross-development of apps, but in the later years as more powerful cross-development kits have entered the market, the popularity has increased as well and it’s now the go-to option for most apps when they target Android and iOS at the same time.

Cross-platform app stacks provide the means for developing one code-base that will work on both devices.

Flutter was introduced by Google in 2017 and is one of the three most popular cross-platform development kits. It supports Hot Reload enabling code changes shown immediately in the emulated app during development. With over 500,000 developers it has an active community and it’s often updated with new features.

React Native is as popular as Flutter. Created by Facebook in 2015 to replace the HTML version of Facebook offered at that time, it has since been adopted by mobile developers worldwide. For complex apps, it can output slower rendering due to the translation from its core language JavaScript to native app code demanding more processing power.

Xamarin is the grandfather of cross-platform development. It has been around since 2011 and currently owned by Microsoft. It’s got fast performance, but can get pricey for professional and enterprise use with developer subscriptions starting at $1,199.

DART is the programming language used for Flutter development. It has been built from the ground-up by Google to provide optimized apps.

JavaScript is pre-dating React Native, but it has since been adopted for development in React Native. One advantage of using JavaScript is a big pool of talented app developers are available due to their experience from other platforms.

C# is used by developers for Xamarin based apps. Invented by Microsoft in 2000 it is the obvious choice for the Microsoft owned Xamarin.

Flutter, React Native and Xamarin each offer their own SDK for implementing UI guide lines, APIs, testing and debugging for Android and iOS. 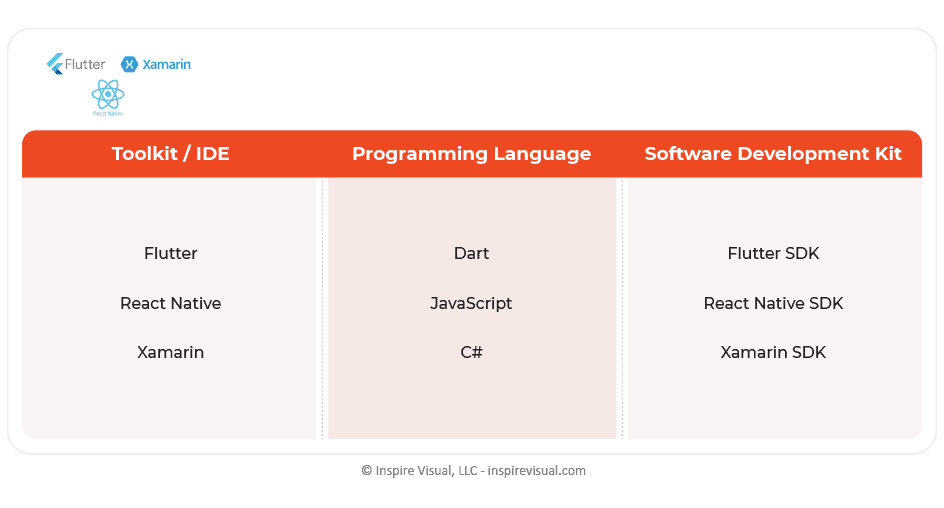 As mentioned in the beginning, a software-based app stack is a group of software programs with a common goal or task. A well-known app stack is Microsoft Office with Word, Excel, PowerPoint and Outlook. On mobile it consists of different programs each with their purpose, but combined they solve a common goal, in this example office management.

The advantage to using app stacks is that they are built to interact and as a result are highly compatible with each other for a seamless experience. You can transfer data between the apps and the files will be formatted to work with all content in the app stacked bundle.

Apple’s app stack app is called Health and is made to organize all your health information in one easy-to-use app. The app pulls data from your iPhone, Apple Watch and third-party apps to combine it in one place.

The Apple Watch can manage your sleep patterns, measure your heart’s health, steps taken, fitness regimes completed and much more. That’s a wealth of information and a great way to help ensure a healthy life style.

The advantage building an app stack like Apple is that they create an ecosystem that offer a lot and spans wide. By doing so Apple’s chance of locking consumers to their hardware greatly increases.

Create your own software-based app stack on iPhone

You are probably most familiar with app stacks like the examples above, and – unless you are a professional app developer – you may not have created your own before.

Without any programming knowledge, you can actually create your own app stacks on iOS.

Granted, you won’t have the luxury of being able to sell your app stacks to other people, and it’s really just a scaled-down version of professional app stacks, but you can enjoy the convenience of having your apps organized into stacks. On iOS it’s called Smart Stack.

How to create an app stack / smart stack on iOS

To do create a Smart Stack on iOS you will need iOS14 installed on your mobile phone. Once that is done, you can start using Apple’s signature widget Smart Stack.

In Smart Stack you can organize widgets by combining them in one place. You can either have all displayed in a scrolling list, or you let iOS decide which apps to show based on your usage.

If you opt for the auto-learn function on your iPhone, it will display the most used apps based on the time of day. For example, if you usually look at your alarm clock, the weather forecast and calendar when you wake up, they are likely to show up at top in the morning. If you usually use streaming apps and your Health app at night, it will show those widgets in your Smart Stack at that time.

Here’s how you can create your own app stack / smart stack:

To add widgets to your app stack / smart stack:

To remove or change order of widgets from your app stack / smart stack:

We as an app development company focus on the first kind of app stack; the technological based.

Our initial discovery process includes picking the right app stack for the app we’re developing, because it is the foundation for the rest of the app’s success. By picking the right one we make sure the project is as successful, cost-effective and stable as possible.

If you want to create your own app whether it is for Android or iOS (or both), we can help you. We have extensive experience with creating high-performing apps. If you want to know a little about what it involves to build an app, be sure to check out this article explaining everything. And don’t forget to reach out, we’d love to talk about your app idea.

Microsites have been around for almost as long as websites. They differ from traditional websites by being better at building brand awareness, increasing customer engagement, generating leads, and optimizing SEO value. The reason? They are highly tailored to a specific customer journey. They are seeing more popularity now in part due to the global pandemic and fear of contamination which has caused a boost in online ordering.

The 5 Biggest Apple announcements for 2021

The spring hardware reveal event in 2021 was just held by Apple from California and a slew of new exciting devices are being released this year. iPad Pros with fast M1 chip and a crispy clear Liquid Retina XDR screen, a redesigned iMac with a 24-inch, 4.5K retina display, a new snappier Apple TV 4K for your home entertainment, a new color option for the iPhone 12 and an iPhone compatible location-tracking device called AirTag. Let’s dive deeper into the new Apple releases.